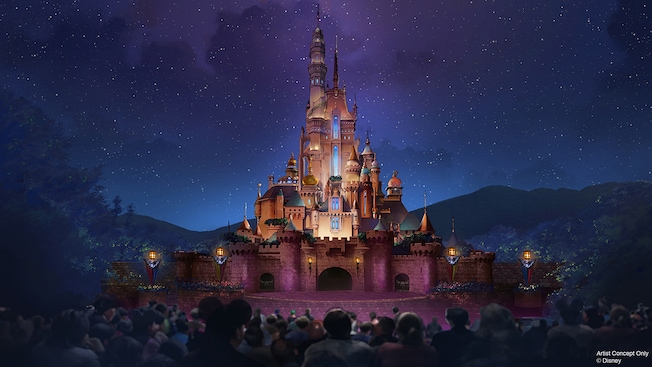 Hong Kong Disneyland Resort (HKDL) is proud to officially throw back the curtain on the name of the park’s new centerpiece after undergoing a major transformation – the Castle of Magical Dreams.

At the D23 Expo 2019 in Anaheim, California, Bob Chapek, Chairman of Disney Parks, Experiences and Products, unveiled the castle’s name, the latest concept artwork and some of the finer details behind the magic of the re-imagined castle. This is the first time that an existing castle in a Disney park has undergone a transformation of this scale, in what is sure to be one of the most momentous, highly-anticipated unveilings at Hong Kong Disneyland. The new thematic towers and spires are now in the process of being lifted into the skies and fitted into place onto the castle base.

The castle’s design is inspired by the stories from some of the most iconic Disney Princesses. The re-imagined castle will pay tribute to each of these Disney heroines for pursuing their dreams. The architectural elements embrace the characteristics of each heroine through the interpretation of colors, icons, patterns and cultural features, with uniquely designed towers, turrets and spires dedicated to their respective stories. Guests will be able to recognize the individual elements inspired by their favorite Disney heroines, celebrating a sense of diversity, inclusion and unity.

With its scheduled opening in 2020, the castle will stand as a shining beacon of courage, hope and possibility, inspiring all who dare to dream big. In addition, there will be a brand new, breath-taking nighttime spectacular as well as a new daytime show, details of which will be unveiled at a later date.

Sneak peek at the Frozen-themed area
Another major installment for the park’s multi-year expansion is the creation of an entirely new themed area — and excitement is already building for the project dedicated to one of the most popular animated movies of all time. Scheduled to open in 2021 after the castle transformation, the new Frozen-themed area follows the release of the upcoming Walt Disney Animation Studios’ Frozen 2 movie later this year. The new area also happens to be the first-ever themed area based on the Frozen movies at any Disney park around the world.

The immersive area will be located between it’s a small world and Toy Story Land and will welcome guests into the world of Arendelle where they can wander through the snowy villages and icy valleys alongside Anna, Elsa, Olaf, Kristoff and more. Guests will join the celebration of Summer Snow Day — a kingdom-wide festival that commemorates Anna saving Elsa with an act of true love. Guests can enjoy taking a boat ride to Elsa’s Ice Palace or laughing with Anna in a cozy forest hideaway, and find plenty of opportunities to come face-to-face with their favorite Frozen friends. Fans can now learn more about two of the area’s main attractions, which are sure to be a major hit with guests.

Wandering Oaken’s Sliding Sleighs introduces guests to shopkeeper Oaken’s infamous store, before they head out on a winding sleigh journey on a fun coaster through the forest and sparkling fjord in Arendelle. Guests will also see Olaf and Sven as they work together to pull the sleigh to the top of the lift.

But the excitement doesn’t stop there. Frozen fans can then immerse themselves in the Frozen Ever After experience, which allows guests to take in every detail of Elsa’s Ice Palace in an unforgettable journey on hand-carved boats from Arendelle’s royal dock. And of course, the entire area will be full of themed food, beverages and merchandise dedicated to all things Frozen, making sure to leave a lasting impression.

More Marvel offerings on the way
In the meantime, HKDL continues to celebrate its latest major addition as part of the expansion in Ant-Man and The Wasp: Nano Battle! Guests have been thrilled to play their part in saving Hong Kong at the Iron Man Experience before heading next door to fight alongside Ant-Man and The Wasp against one of Marvel Cinematic Universe’s most notorious enemies, Hydra. In what is evolving into a truly immersive hub for Marvel fans, the growing area at HKDL even offers guests a chance to visit the S.H.I.E.L.D. Science & Technology Pavilion to discover the very latest technologies being put to the test at Stark Industries. Even more exciting Marvel offerings are in store in the coming years.